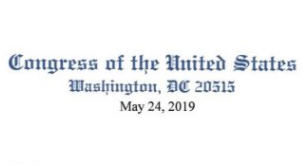 We view the letter as a key component of the Chamber’s National Action Plan for Blockchain, which calls on the U.S. Government to make support of blockchain technology a priority.

The current regulatory environment is stifling innovation in the United States and this letter will help spark an important national conversation about these issues. The forum will bring together key public and private stakeholders to address the benefits of the technology, how it can improve business and government processes and promote financial inclusion while focusing on important barriers to the responsible development of the technology.

Moreover, the U.S. Government is currently supporting key technological advances in 5G, artificial intelligence, and quantum computing. Blockchain technology is widely recognized to have similar transformational potential and must be developed and promoted as a key technology that will fuel cutting edge industries of the future.

“Innovation is part of this country’s DNA and our efforts to further develop blockchain technology can help our country remain a leader in invention and modernization,” said Rep. Trey Hollingsworth, Vice Ranking Member of the House Financial Services Subcommittee on Investor Protection, Entrepreneurship, and Capital Markets. “I am encouraged by the Administration’s efforts to explore financial technology and artificial intelligence and I look forward to working together as the technology evolves.” An Illustration of State’s Legislative Efforts in 2019